Hilton Puts Marketing Focus Back on Hotels With New Brand 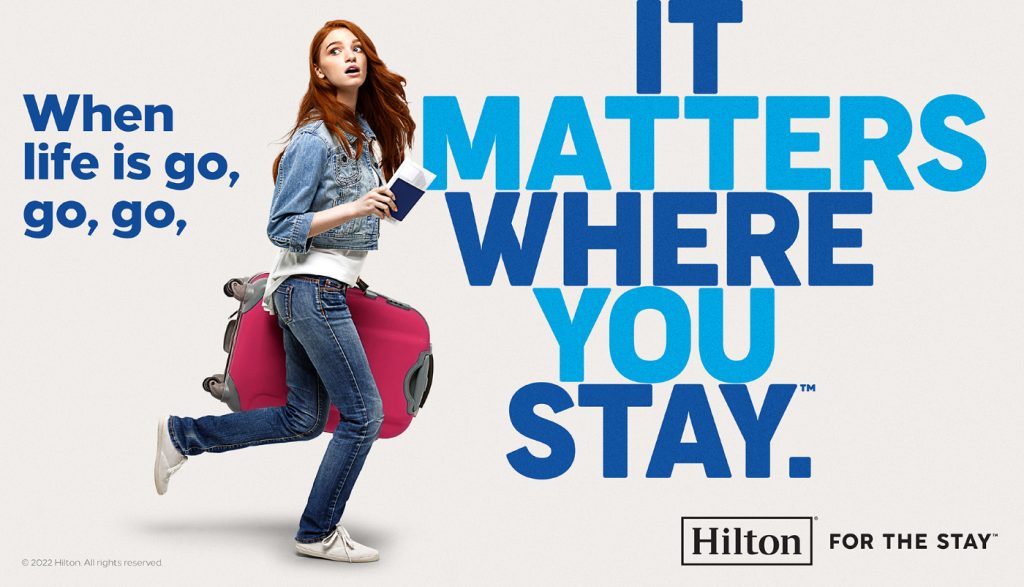 Hilton Puts Marketing Focus Back on Hotels With New Brand

Hilton risked falling out of the cultural conversation as newer brands like Airbnb made a lot of noise. So the company has responded with new marketing tactics. One of them is putting hotel stays, rather than beaches or sunsets, upfront in its ads. Another tactic is to mock rentals.

Hilton Worldwide made two marketing moves on Monday. It formally launched an international marketing campaign that highlights a reliable lodging experience as an antidote to the unpredictability of travel today. In a longer-lasting move, the hotel giant also committed to anchoring its marketing to a catchphrase — “for the stay” — indefinitely.

“Campaigns may get swapped out or refreshed, but ‘Hilton — For the Stay’ is kind of what you would tattoo on the building or put on the back of a business card,” said Mark Weinstein, chief marketing officer.

The first corresponding campaign includes light-hearted ads featuring travelers, such as ordinary harried parents, facing the stresses of travel, such as traveling with children. The ads may prove well-timed in this season of highly publicized tales of flight disruption.

“Serendipitously, this story may resonate more than ever,” Weinstein said. “But to be clear, we’re not trying to be mean-spirited. What’s important is to remind people, ‘It’s worth it.’ Even if you arrived at your trip a day later than planned or faced other obstacles along the way, once you get there, it’s worth it.”

The newest video ads include extended scenes at properties showcasing their charms.

“What’s missing in most hotel advertising is the hotel,” Weinstein said. “Most hotel companies — and Hilton has been guilty of this, too — have run campaigns that advertise the destination and its beautiful sunsets or beaches rather than the hotel itself.”

Snark for Airbnb and Vrbo?

The campaign slogan for Hilton’s latest volley of ads is: “It matters where you stay.” The company isn’t shy about implying that its hotels are more reliable than alternative accommodations.

“The home-sharing space has particularly been telling a story about the transformative power travel, which seems to mean you must go out there on a paddle board and eat goji berries and do goat yoga at sunrise,” Weinstein said. “But a lot of times, travel is just about winning back that important client or reconnecting with your loved ones after the birth of a child.”

The ads implicitly draw a contrast between the reliability of hotels with the perceived unpredictability of alternative accommodations.

One commercial specifically criticizes the risks of vacation rental and short-term rental rivals, where guests arrive at a house that looks like a house in a scary Hitchcock film.

Hilton has been a provocateur before. Between 2016 and 2019, the hotel giant generated buzz with its campaign “Stop Clicking Around,” which encouraged consumers to book directly instead of through online travel agencies.

Given that most travel ads accentuate the positive, it may be daring for a travel company to even allude to what can go wrong on a trip in its commercials. But Hilton’s marketing team thinks its latest messaging will resonate.

To generate buzz, the Hilton marketing team successfully wooed Paris Hilton, scion of the family empire, to record a commercial, which she hadn’t done before. The ad touts how Hilton Hotels make it easier to book adjoining, connected rooms than some other hotel groups. It also nods to her personal brand.

Hilton tapped ad agency network TBWA, which it has used for marketing work since 2017, to help think through what the Hilton group’s “platform” should be. Hilton has never had a global brand platform before.

“TBWA has this methodology called disruption, where they help you search the industry to find the norms and conventions and find where the gaps are and crack the code,” Weinstein said. “They’ve helped Apple, Nissan, and many other iconic brands.”

The process identified a broader strategic opportunity to create a lasting platform, similar to a slogan or catchphrase.

American Express has used “Powerful Backing” for years. Nike made “Just Do It” world famous. De Beers has “A Diamond Is Forever.”

Some skeptics may argue that “Hilton – For the Stay” isn’t quite as catchy as those famous slogans.

But Hilton’s marketing team wanted to avoid being prescriptive like some other travel companies have been in their messaging.

“Maybe we shouldn’t try to put an adjective on this stay,” Weinstein said. ‘Let’s not try to say it’s a great stay or a beautiful stay or a lovely stay. Let’s be really honest and bold about the facts that travel can be clunky and things can go wrong.”

Weinstein described “for the stay” as “a statement of intent” and a guide for more sharply defining how the group markets its 18 brands.

Ads touting Hilton’s new platform, “for the stay,” have appeared in recent weeks on streaming services and social media. But they get their global TV broadcast debut shortly, with an integrated rollout of digital out-of-home advertising.

“We really challenged ourselves to use this moment [of the pandemic recovery] to figure out how to tell our story differently, to tell it better, and to tell it stronger,” Weinstein said. “We recognized that what we stand for is what it means to come through our doors for a stay.”

The Instagram Chefs and Bakers Turning to Brick and Mortar